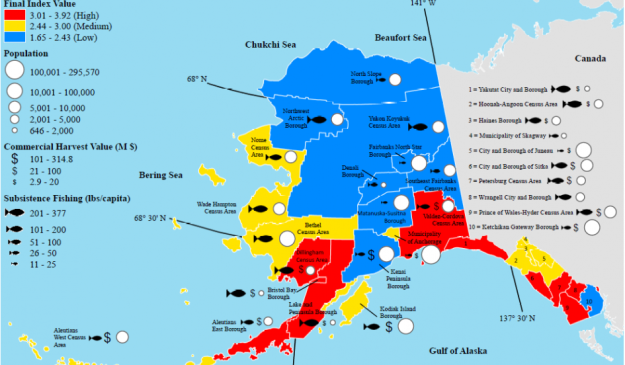 The sinuous Alaskan coastline, which is 50 percent longer than the rest of U.S. coastline, produces half of all commercial seafood caught in the nation. It is also ground zero for ocean acidification, one of the most devastating effects of our carbon dioxide emissions. In other words, those bountiful crab, clam, and salmon fisheries may not be around much longer.

What scientists don’t know is how much longer.

“The scary thing is that we don’t know the answer to that question yet,”  says NOAA oceanographer Jeremy Mathis. “The potential is certainly there for it to be a rapid event, literally overnight. Whether that’s a slow degradation of the fisheries over decades, or whether a species is there one year and isn’t the next, we still don’t know that. That’s what I’m most concerned about.”

Ocean acidification can be thought of as climate change’s similarly disasterous twin. Oceans absorb around one-third of the carbon dioxide emitted into the atmosphere. As the concentration of CO2 rises, so does the amount that sinks into the ocean, raising the acidity of the water. Acidification is happening everywhere, but even more rapidly in Alaska, where cold coastal waters are able to absorb more carbon dioxide, and where circulation patterns bring deep, naturally acidic water up toward the surface. Sea creatures rely on specific conditions to stay alive. When those conditions change, so do their populations. Usually for the worse.

An acidification spike around the coast of British Columbia in February 2014 wiped out 10 million scallops. Acidification in the the Pacific Northwest around 2006 began dissolving oyster larvae, wiping out some hatchery populations completely. But projected acidification in Alaska would be on a much grander scale. Hundreds of thousands of people depend on the Alaskan fishing industry for jobs and food.

Mathis and his team’s latest research, published Tuesday in the journal Progress in Oceanography, paints a comprehensive picture of just how threatened certain Alaskan communities are by the prospect of fishery decline or collapse. The fishing industry in Alaska supports over 100,000 jobs, and generates more than $5 billion in annual revenue. Beyond commercial fishing, around 120,000 Alaskans, roughly 17 percent of the state’s population, rely on subsistence fishing to feed their families, according to the report. The analysis found that communities most reliant on fishery harvests, with relatively lower income and fewer alternative job options, face the highest risk of ocean acidification.

“Economic diversification is key,” Mathis says. “A lot of those places are almost solely reliant on the fishing industry. It’s like a stock portfolio. If you don’t have any diversification, you have a lot of risk.” The report proposes job training programs, increased educational options, and investing in new infrastructure to open up new opportunities to coastal  southeastern and southwestern Alaska, where acidification is projected to have the most dire economic consequences.

Among the perils of higher acidity is that it makes it harder for mollusks like clams and crustaceans like crabs to build their shells. The lowered pH dissolves calcium carbonate, it difficult for the animals to extract enough of the mineral compound from the water to build shells. It also appears to damage gill function in crabs and change their behavior, as pointed out in a Newsweek cover story earlier this year.

Pteropod, a tiny swimming sea snail, is especially vulnerable to reduced shell-building due to acidification in the Gulf of Alaska. These little snails make up half the diet of the pink salmon, so their survival and the survival of Alaska’s salmon runs are intimately linked, according to Mathis’ earlier research, as reported by Scientific American. Pteropod populations in similar acidity conditions as those already seen in coastal Alaska have shown “rapid and significant shell dissolution,” according to the latest report.

In the past 200 years, global average pH has dropped by .1 units. If CO2 emissions continue as projected, the next 100 years will sink pH by another .3 units. “That’s a 300 percent change by 2100. I think that if those changes come to fruition, the oceans in general are probably going to be in trouble,” Mathis says.

Once acidity reaches those levels, there’s no turning back–at least not in a terms of time scales relevant to people alive today. “It is reversible, but not on human lifetime scale,” Mathis says. In a fantasy scenario where we halted all CO2 emissions beginning right now, it would still take hundreds of years to recover. If we emit the amount of CO2 we are projected to emit over the next hundred years, Mathis says, it will take “hundreds of thousands of years” to bounce back.

Long before then, sometime in this century, but perhaps overnight, it may be the people of Alaska who first feel the socio-economic pain of ocean acidification.